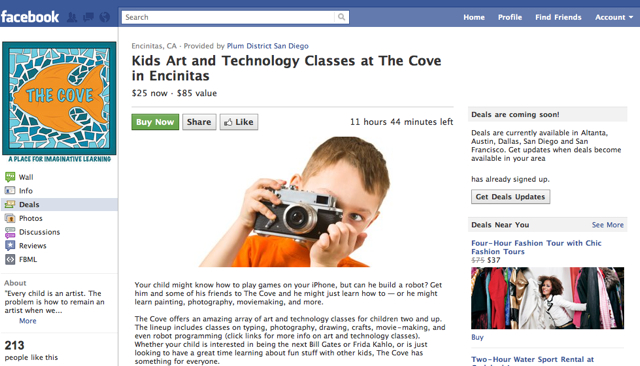 Also this week, Facebook launched its Deals program and has positioned itself to compete with Groupon and LivingSocial. Facebook Deals is currently available in five U.S. cities (Atlanta, Austin, Dallas, San Diego, and San Francisco) and 11 companies have signed on as partners for the trial stage. The program is likely to expand to more cities and companies if users latch onto it. Both the Send button and Facebook Deals can serve as valuable marketing tools for your business. Below is information on what the Send button can do for you and a rundown of the new deals program.

Photo credit: The Cove - A Place for Imaginative Learning

Get More Likes with the Send Button
Facebook’s new Send button can be a major addition to your website and blog. When a user privately shares content from your website with their friends using the Send button, it registers as a Like on your brand’s Facebook Page. This means your Page’s Like total is now composed of the number of traditional Likes you receive and the number of shares your content gets. If you find that your Page isn’t receiving the amount of Likes you want, or expect to see, focus on the content you publish on your website or blog. Content that is helpful, informative, and/or entertaining is likely to be shared and emailed. And since the Send button includes an email option, it’s imperative that your content is worthy of being shared. You can find the code for Facebook’s new Send button on the Facebook Developer’s Website.

How Facebook Deals Work
Facebook Deals is a separate program from the old deals program, which is now called “Check-In Deals.” The difference between Facebook Deals and Check-In Deals is the latter is mobile based and rewards users with an offer of sorts for checking-in at a business (ala Foursquare). Facebook Deals, on the other hand, are redeemed offline after they are purchased on Facebook.com. Small to medium sized businesses may want to keep an eye on the progress of Facebook Deals during the next few months. The program is geared toward helping local businesses generate revenue while strengthening their presence on Facebook at the same time. Since Facebook Pages and Deals are connected to each other, the process of gaining repeat customers and keeping them engaged will become easier.

Facebook Deals is also poised to make it easy for people to buy and share offers on the social network. Group activities are emphasized in the program and Facebook users are encouraged to discover interesting experiences with their friends offline. Facebook credits, as well as some credit cards, can be used to purchase deals. Unlike Groupon and LivingSocial, Facebook Deals gives users the opportunity to purchase offers for their friends as “gifts” – strengthening the program’s social layer. Existing deals are readily accessible in the new Deals tab which users will find on their Facebook homepage. And one last thing to note is that each company currently enlisted in the program has set an expiration date for their offer.

Seal the Deal
What are your expectations for the Send button and in your opinion, will it be as successful as the Like button? What would you like to accomplish (besides more sales) with Facebook Deals?