How the New Google Reader Can Benefit Your Online Marketing 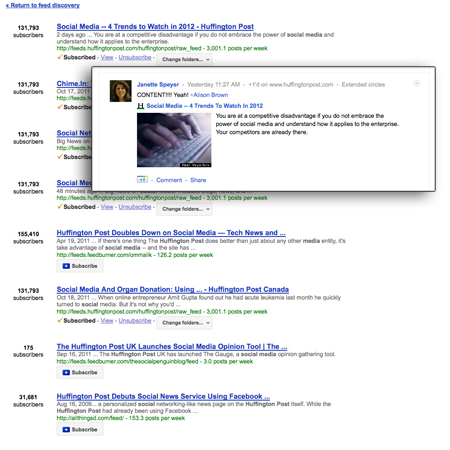 How the New Google Reader Can Benefit Your Online Marketing

Google has been busy updating a host of different applications from Gmail to Google+, and now the update for Google Reader. The new Google Reader offers an interface overhaul that is a lot more intuitive, and also offers the ability to share on Google+. This updated version helps Google further integrate with the social media community and promote the use of Google+. There are also some additional benefits that can help your online marketing efforts to either streamline or expand your social media impact.

The overall interface of Google Reader has been revised and refined. It’s a lot cleaner and more organized than before. There is less clutter, more white space, and it’s easy to access everything from settings to starred items and trends, to recommended items and sources. The dashboard on the left side of the home page gives you access to all the links you need. Overall, the look is more user-friendly and less intimidating than before, and looks rather similar to the Gmail interface overhaul that took place not too long ago.

It’s easier to manage your subscriptions to RSS feeds as you can now import additional subscriptions from outside feed readers as well. You first have to go to your other feed readers and export a file with an “OPML” (Outline Processor Markup Language) extension, but once you do so, you can easily upload that file to Google Reader and see all your subscriptions listed in one place. For those of us out there that have been using multiple readers, this new feature can save a lot of time.

The sharing options have been a somewhat controversial topic in the online community. Some welcome the sharing changes, while others do not. According to the official Google blog, they have added:

With the shift in focus to sharing on Google+, Google is trying to integrate Google+ with the Reader and promote the use and relevance of Google+ within the social media world. Even though it will take time for some users to adapt, and may even push some away, Google is aware of the controversial changes and is accepting feedback on the issue.

How Google Reader Can Impact Your Business

Even if you’re not a fan at first, it’s still a lot easier to circulate content from RSS feeds on your social media networks with the new changes. The new changes still allow you to share on Facebook and other networks, but you have to enable them under the “send to” tab in the Google Reader settings. Even though the beloved “sharing with a note” option exists only with Google+ now, the streamlining with other applications only enhances Google Reader’s ability to reach targeted audiences.

Google Reader can enhance your SEO and marketing efforts by running your blog through it. For example, blog posts can be publicly shared (liked) or shared with friends (starred) if the reader enjoys the post. This shortcuts the popular posts for readers and they can in turn spread them virally as friends share the content. The higher number of shares or likes on a post, the more opportunity of getting noticed. This is an example of push pull marketing by having readers download an RSS feed to their Google account through Reader.

Once you get comfortable with using Google Reader, you will find it to be another excellent tool to market your business. So make sure your profile and your posts are included on the Google Reader aggregator.