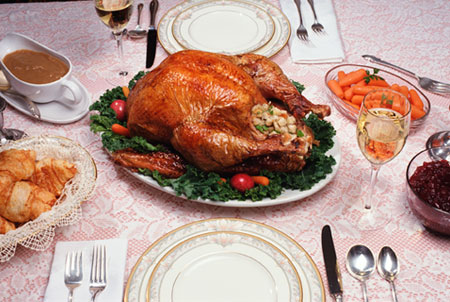 Thanksgiving signifies a time of year where people gather with their families and reflect upon what they’re thankful for. The first Thanksgiving celebration is believed to have taken place in 1621, when Plymouth colonists and Wampanoag Indians got together and celebrated the autumn harvest. The tradition continued for many years, but it wasn’t a national holiday until President Abraham Lincoln officially declared it during the Civil War.

Today, Thanksgiving has many meanings, based on various family traditions. It can be anything from watching football, to eating juicy turkey or reuniting with family members we don’t see often. For some, it may even mean getting to bed early in order to get the best sales at the mall on Black Friday, or now Black Thursday!

For a little diversion, here are some facts to share around the family feast:

The marketing frenzy surrounding this phenomenon has taken off in recent years. Before the beginning of the Black Friday tradition, most people spent the day after Thanksgiving with family or recuperating from too much food. It’s been the busiest shopping day of the year since 2005, when the term “Black Friday” was officially coined.  Some claim it is because the sky is black when shopping begins; Others refer to the hoards of shoppers as a reference to the Stock Market Crash in 1929 called “Black Friday.” I prefer to say it is what helps start putting retailers in the black. Since most non-retail employees are given this Friday off from work, it makes sense that it would be the busiest shopping day of the year.

This year, the shopping frenzy at many department stores will begin at midnight, the night of Thanksgiving. As more companies started to catch onto this, competition took off and retailers started getting more competitive with their hours. Some stores are offering sales starting on Thanksgiving evening at 10:00 PM and extending until 2:00 AM the next morning. While the shopping frenzy used to continue casually throughout the weekend, most retailers have cut it down to just one day, thus creating a sense of urgency and more shoppers.

The Biggest Online Shopping Event of the Year!

Cyber Monday also made its official debut in 2005 when marketers decided to transform the Monday following Thanksgiving into the biggest online shopping event of the year. According to comScore, a leader in measuring the digital world, consumers spent over $1 billion shopping online on Cyber Monday in 2010. With holiday shopping still fresh on consumers’ minds when they return to work on Monday, it slowly caught on as a new niche that companies could capitalize on if they made it an official shopping day full of sales. Since its introduction, the term “Cyber Monday” has even been used internationally to mark the official start of the holiday shopping season. It also does have its perks, most notably the fact that you don’t have to go without sleep in order to get good deals on merchandise.

Getting Back to Your Roots

Whatever your tradition, Thanksgiving makes us all think about what’s important to us. If you’re not particularly excited by the idea of spending lots of time, energy and money on gifts right after Thanksgiving, you’re not alone. While some may flock to stores to get the best deal on a new flat screen TV, it somehow takes away from what the root of Thanksgiving is meant to be about. It’s a time for reflection, and a time for being reminded of all the gifts life has already given you. If you are planning to take advantage of Black Friday and Cyber Monday deals, make sure you check company’s Twitter and Facebook pages for the most up-to-date insider scoops!

The Web Success Team wishes everyone a happy, healthy and safe Thanksgiving. We hope you are able to be with your families to share the start of this wonderful holiday season.

Here’s one of our favorite stuffing recipes (simple, and yummy!):

Put it in the food processor then stuff it in the turkey. If you have a 16 lb. turkey, make sure you cook it for at least 9 hours to ensure it is cooked throughout. Enjoy! Happy Thanksgiving!