Candidates Use of Social Media in the 2012 Election

Home → Branding →Candidates Use of Social Media in the 2012 Election

Candidates Use of Social Media in the 2012 Election 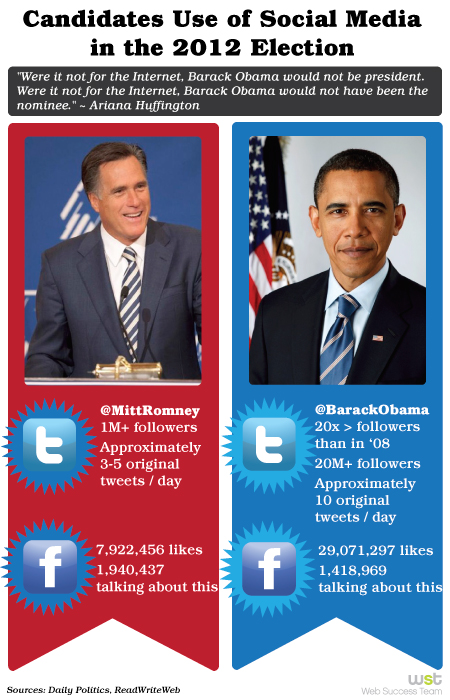 After seeing how important social media was in winning his last election, with blogs, twitter and YouTube helping his efforts to go viral, Obama’s team has really stepped it up for this year’s election. Last election, our elected President had 120,000 followers when he was elected (information sourced in a Web Success Team article published in 2008) this year, @BarackObama has nearly 20 times that of 2008, with over 20 million followers and an average of approximately 10 original tweets going out every day.

On Barack’s Facebook page, they have invested some obvious resources in making this a place to not only stay connected with the President, but support his campaign as well. With even more fans here than on Twitter (nearly 29 million) he has widgets like; an online Obama store (for election “gear”), a commit to vote button and of course, a donate button.

According to ReadWriteWeb, in the last election Obama’s campaign team lead in using technology to connect to his audience, the difference in followers this year seems to indicate that happening once more.

With Obama’s team putting so much into social media this year, you would think the opposing candidate would see it’s value. @MittRomney has about 20 million fewer followers than Obama and sends only 3-5 tweets out per day.

It seems the Republican candidate is taking less advantage of social media platforms. A study published in Daily Politics evaluated content from June 4-17; Obama’s Facebook posts garnered more than 1.1 million “likes” to Romney’s 633,000, the president’s Twitter account got 150,000 retweets compared to 8,600 for Romney. Even on YouTube their accounts differed in traffic by 400,000 viewers. Of course, we have to take into account that these numbers are partially a function of a candidate versus a sitting president.

Who Will Take Home the Win?

I am not a political reporter and I certainly wouldn’t say that social media will gain you a presidency, but voters additional access to Obama, especially the younger, more social media friendly population (civicyouth.org says that the portion of the vote that 18-29 year olds make up is 21% of the eligible vote), and with our President’s strong online marketing plan, he might just have enough of an advantage to pull in some extra support and votes that he otherwise wouldn’t have. We will know soon enough!