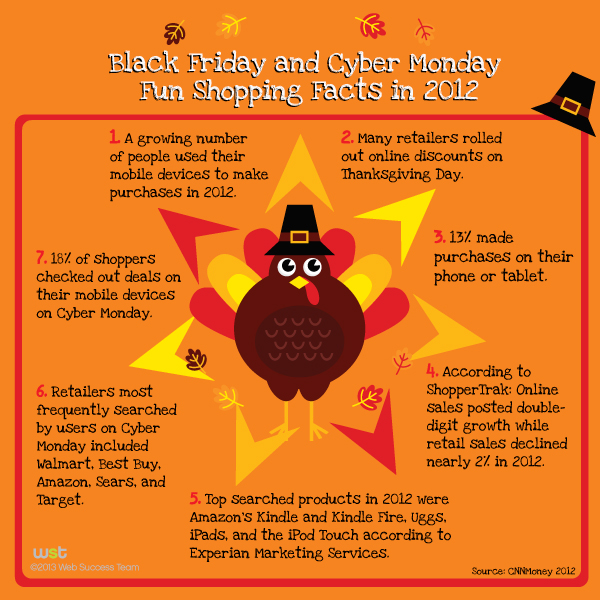 Thanksgiving signifies a time of year where people gather with their families and reflect upon what they’re thankful for. It’s also fast becoming a major shopping weekend with Black Friday, Cyber Monday and the introduction of Grey Thursday. Today I will share some interesting facts about the weekend shopping rush and how it all got started.

The controversial “Grey Thursday” takes place on Thanksgiving and was introduced in 2012. Some stores like Walmart and Target open for 24 hours during the holidays to drive shoppers down the aisles and to capitalize on early bargains. This very controversial shopping day has already caused many a concern with the loss of family time. I personally would not advise encouraging anything that takes away from much deserved rest and recreation.

According to Wikipedia, Black Friday originated in Philadephia in 1961. Traditionally retailers operated at a financial loss from January through November, and “Black Friday” indicated the point at which retailers begin to turn a profit, or “in the black”. Since most non-retail employees are given this Friday off from work, it makes sense that it would be the busiest shopping day of the year. As more companies started to catch onto this, competition took off and retailers became more competitive with their shopping hours. While the shopping frenzy used to continue casually throughout the weekend, most retailers have cut it down to just one day, thus creating a sense of urgency and more shoppers.

Cyber Monday also made its official debut in 2005 when marketers decided to transform the Monday following Thanksgiving into the biggest online shopping event of the year. According to comScore, a leader in measuring the digital world, consumers spent over $1 billion shopping online on Cyber Monday in 2010. With holiday shopping still fresh on consumers’ minds when they return to work on Monday, it slowly caught on as a new niche that companies could capitalize on if they made it an official shopping day full of sales. Since its introduction, the term “Cyber Monday” has even been used internationally to mark the official start of the holiday shopping season. It also does have its perks, most notably the fact that you don’t have to go without sleep in order to get good deals on merchandise.

Other Fun Shopping Facts in 2012