How Much Klout Do You Have?

Home → Marketing →How Much Klout Do You Have? 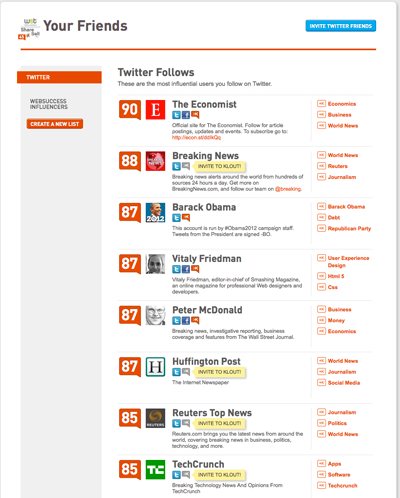 How Much Klout Do You Have?

If your business heavily relies on social media, then it’s important to make sure that the time you’re spending promoting your business is paying off. As social media continues to play an integral role for any online marketing campaign, it’s becoming increasingly important to track the performance of your online marketing efforts. Using the application called “Klout,” you can measure all your social networking activities by how much engagement they generate. It will help you to measure how successful your brand is and, the higher your score, the more “klout” you will have.

If you spend a lot of time posting online and promoting your brand, it would be helpful to see how much influence the content you’re posting is having on your online community. Klout allows you to manage the analytics of all your social networking sites, which includes Facebook, Twitter, Google+, LinkedIn, Foursquare, YouTube, Instagram, Tumblr and others. On a scale from 1 to 100, it rates how influential your content is, and it gives you a list of people whom you influence the most, and a list of people who influences you the most. The more you interact with your network, and the more likes, comments, or re-tweets you receive, the higher your score will be.

A Virtual Pat on the Back

Klout gives you the option to view analytics based on what topics you are sharing, such as online marketing or social networking. If Klout recognizes your niche and it gives you a high score on that topic, it means you’re on the right path.

Another useful feature on Klout is the option to give someone a K+. It’s similar to a “like” on Facebook, but it’s more along the lines of giving someone a virtual pat on the back, or saying “I’ve learned something from your post.” More K+’s lead to a higher Klout score, but they also show others that people in your network consider you a credible source in your field. This can be a great tool for branding since it is industry specific, and most people that avidly use Klout are heavily involved in social media, so proving you’re an expert in this field would mean more people will trust your brand.

Since Klout rates you based on the impact on your sphere of influence, it’s interesting to analyze the impact some people have on not only the online world, but on the world in general. According to Klout, Lady Gaga has a score of 90 and claims that she is influential about Music and Fashion, but more importantly, that she influences roughly five million people. With the most followers on Twitter, you might expect the score to be higher, but Klout doesn’t just look at numbers when determining the score, it looks at the quality of content.

Another influential Klout user, Guy Kawasaki, has a score of 85 even though he only influences 158,000 people. Because of the consistent and high quality information he chooses to share, he gets a lot of positive feedback, which equals a high Klout score. What this means for small businesses and branding is that even if you don’t influence thousands of people, you can still have an impact on your direct network and that impact is now tangible.

There have been a lot of mixed reviews about Klout, but overall you get a good return compared to the time you need to spend in using it. The analytics are broken down fairly simply, and since it combines the Klout score for all your social networking sites on one page, you don’t have to spend much time navigating through endless pages of information. It can be debated whether Klout is promising enough to give you an accurate picture of your online influence, but overall, if you only spend a few minutes a day reviewing your scores, you will have a better understanding of how your online presence is influencing your clients. The more you understand your influence, the better you will be in creating the reputation you want for your brand.