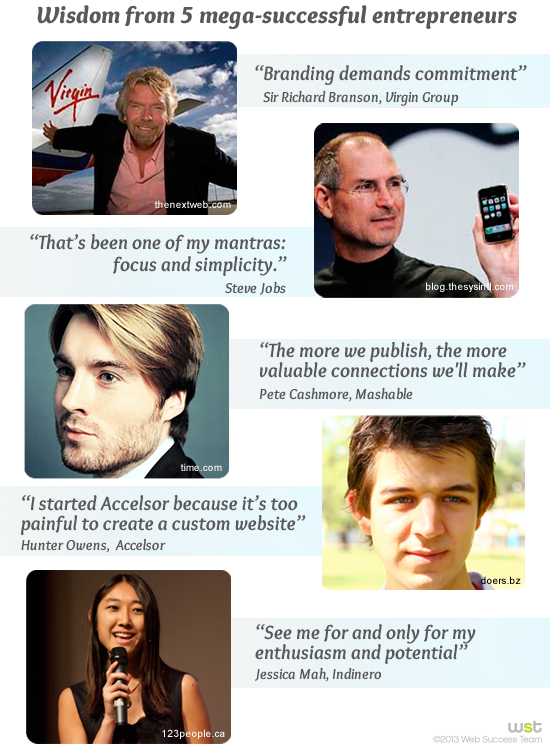 By Janette Speyer and Katrina McNeill

At times we all need to be inspired. This is why we’re sharing our five entrepreneurial stories so you might find inspiration in their mega-success and how they developed their companies and emphasized the importance of branding.

Perhaps the most shining example of an entrepreneur is Richard Branson who came from little and grew into a motivating force. At just 16, he published the first issue of his student magazine, hoping that it would be a youth version of Rolling Stone, however it never did catch up to the iconic magazine. Instead of wallowing in defeat, Branson took it as a lesson and moved on to bigger and better things. We all know that he went on to create the Virgin Brand.

Branson on Branding: “Brands exist as a means of communicating what to expect from a product or service.” He goes on to talk about how his brand (as yours should) tells you that using one Virgin product is like using any other, “It is a guarantee you’ll be treated well, get a high-quality product that won’t dent your bank balance, and get more fun out of your purchase than you expected.” Branson is also his own brand, promoting himself under the Virgin name in all that he does. An example of which is when he and his Virgin Atlantic Challenger II crossed the Atlantic Ocean in the fastest ever recorded time. He continues such adventures regularly, never missing the opportunity to promote the Virgin Brand.

A man who created dreams, not products, Jobs had some great steps for success. First and foremost, his drive did not come from a desire to be rich (as it might with many of us).

Jobs was quoted in The Wall Street Journal as saying, “Being the richest man in the cemetery doesn’t matter to me … Going to bed at night saying we’ve done something wonderful… that’s what matters to me.” So what can we do to be more like Steve Jobs?

Jobs on Branding: Steve told stories, he created products that “wowed” and he kept his marketing simple and clean. This formula worked for him, and perhaps with a smart enough product and dream, it could work for you too!

If you work in online marketing, you know Mashable; it’s an award-winning site and one of the largest and most popular destinations for digital, social media, and technology news and information with more than 20 million unique visitors per month and is ranked as the most influential media outlet by Klout. You may not yet have heard about the company’s CEO and Founder, Pete Cashmore. Pete started the company in 2005, and it has grown quickly into one of the top 10 most profitable blogs in the world. Pete was named one of Ad Age’s 2011 influencers, a Time Magazine 100 in 2010, and a Forbes magazine web celeb 25. Someone so involved in marketing must have all the branding tricks! So how did Pete do it? Learning along the way, Pete took a hint from the London social media scene, and promoted his brand, not himself (Londoners consider self-promotion egotistical).

Cashmore on Branding: It was not his only key to success, he also claims he is “ridiculously persistent” and used his youth and energy to reach his success. The bottom line was, he had a product that was needed, but being offered by many, and his “ridiculous persistence” and lack of ego carried him to success.

Hunter Owens is inspirational because of his success at 21 years old. He was already the Director of Marketing at Accelsor by 19 and at 16 he founded his own company,  MyTechQuestion. He is also responsible for the formation of Millennial Generation Entrepreneurs, a coterie of Generation Y entrepreneurs who have collectively raised $21 million as founders at an average age of 18.

Hunter on Branding: Accelsor is the ultimate website creator, and helping developers create a website in under a minute. He recognized a niche, a need and went for it. Starting with some testing, he simply put up an idea on a website and it caught fire. Hunter says, “That’s what I love about marketing and the Internet, being able to connect with all those billions of people over those wires, or wireless.” Hunter’s steps to success seem simple; test your market, and get yourself started in a business with a recognized need.

We couldn’t leave the ladies off the list! Young Jessica Mah is the founder of Indinero, which helps businesses track their money online. Indinero received over $1 million of funding as a startup and is still growing! Jessica is now 17 and is the managing editor of Startupism.com and Jessicamah.com all while attending college.

Jessica on Branding: She says (in her blog) that she is trying to stay in the shadows despite her accomplishments as she doesn’t yet see herself as successful. That’s why we find her inspiring! Always pushing for more, she has already done more than most at 17 and doesn’t yet feel accomplished. Perhaps this is the kind of business woman that will perpetually feel the need to take another leap forward. Perhaps that ambition and mentality of always wanting more should be the driving instinct of more successful business woman!

Achieving Your Own Success

We can’t all be millionaires, but we can make our own success by following the lead of inspirations such as these folks. From a life-long journey of fine-tuning the branding of a powerhouse like Virgin, or just getting started in the world of start-ups at 19, we all have the ability to take a good product and make it a success! Take a hint from Jessica and strive for more, follow in Steve’s footsteps and dream big! Find your motivation and be sure to take the time to brand yourself or your product using inspiration from business men and women like these.