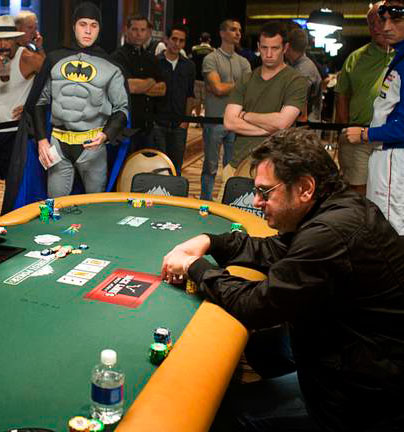 There were some marketing fireworks over the 4th of July holiday at the World Series of Poker Tournament in Las Vegas. Batman made his appearance as one of the entrants and turned the normally high roller tournament into a media frenzy.

Sure there were the predictable Hollywood and sports celebrities along with the well know poker superstars. People in amusing hats and sponsored shirts with their knuckle-duster rings and assortment of Vegas bling.

Batman Takes Over the World Series of Poker Tournament.

But no one stood out or created an instant sensation than Philip Dwek, aka Batman. It was bold, brazen and garnered instant media attention because it was so outrageous and unexpected. The buy-in was $10,000 so everyone comes with their best poker face. Philip on the other hand came in costume and character as Batman and ready to play.

The cape crusader was interviewed in the main media like ESPN, on poker blog sites, in USA Today and multiple other media outlets. The deeper he goes into the tournament (no easy task) the more of a sensation he will make. Already he has made it into the second day.

Savvy marketing can come in the least expected places.

Philip Dwek, told us poker is a game, so why not have fun playing it. Pure marketing genius. Players were dropping like flies and as the tables were consolidating, he was moved to the featured table in front of the cameras and some tournament celebs like Val Kilmer. Obviously the tournament officials wanted to capitalize on this marketing bonanza. Philip will be approached to put a sponsor badge on his costume for thousands of dollars and will probably make is entry fee back and then some.

This is a perfect example of guerrilla marketing tactics. Marketing must be innovative to break through the advertising fog. Often the simplest solutions are the best. Be singular minded with a specific message. Poker Batman is the biggest celebrity at the tournament and deservedly so. I even predict he will be entered next year with sponsorship and TV appearances. He is now an urban legend and will forever go down in World Series of Poker highlights.