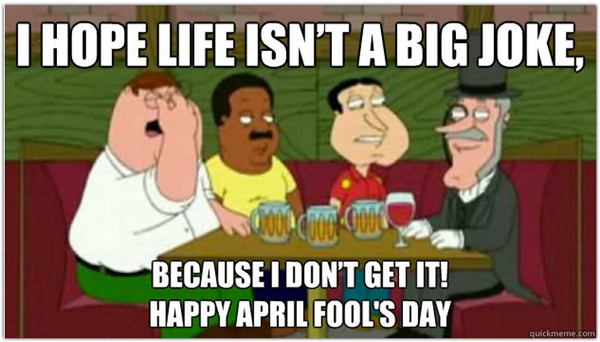 The exact date of the first April Fools’ Day is reportedly unknown, but anyone capable of reading this article no doubt grew up with this “holiday.” Now, April Fools’ Day is growing up with the help of social media. It’s evolved into a shared experience that gives today’s pranksters even more pranks to be inspired from as well as the joy of sharing them with your social networks.

1. There are so many videos to choose from, but we love Conan O’Brien’s takeover of Mashable. Last April, if you went to Mashable.com, you would have noticed that Conan O’Brian’s iconic hairdo capped off Mashable’s logo. Accompanying the logo was Conan’s mark, “Powered by Conan O’Brian.” In the YouTube video Conan explains, “I’m sick and tired of scanning the Internet looking for any news about technology: Devices, gadgets, what’s coming up, maybe even a rating system for gadgets that are out there. It doesn’t exist on the web and it’s high time it did,” Conan writes. “I go to the Mashable see the atrocious job they’re doing. So I decided it’s time for me to take it over.” The written word does not do it justice, so go see the video and have a good laugh!

2. Pinterest gets two pranks because it is such a huge resource for April Fools’ Day. To start, the prank is on us! We are not sure how many were actually duped by this one, but it certainly got a lot of attention! Warby Barker, an eyeglass company for dogs, was circulated through a variety of social platforms, as many do, but you can check it out via this link on Pinterest to see if they would have fooled you. It’s pretty convincing!

4. Fans of the fake, “PinPal,” were fooled last year when they announced PinPal on Facebook. They told users that the online product was a dating site that collects users’ information from Facebook, Twitter, and Klout, and then brings it into Pinterest and uses a “secret algorithm” to match up “like-minded Pinterest users” for “no-strings attached dates.” Very elaborate, so much so that you have to wonder who spent so much time putting it together? PinPal was brought to you by the folks behind Punk Views on Social Media. A snarky sort of anti-social media site that believes social media is a “failure,” and that it “rewards the banal and the pop culture seekers.” Ah well, good prank anyway!

5. Last on the list is from TechCrunch, one of the best aggregate technology blogs out there. A lot of people fell for this one as it has been talked about for years. TechCrunch writer, Jon Orlin, wrote that Facebook was finally considering adding the “hate” button. Go see the prank in all its glory on TechCrunch. Were you fooled?

To say the least, social media has pushed a lot of great prank ideas out there for all to see and use. Beyond that, it is also a way for the world to laugh together. It’s nice to know that people, and even corporations, want to make others laugh. Enjoy your April Fools’ Day and share your favorite pranks with us on our Facebook, Twitter or Google+ pages.