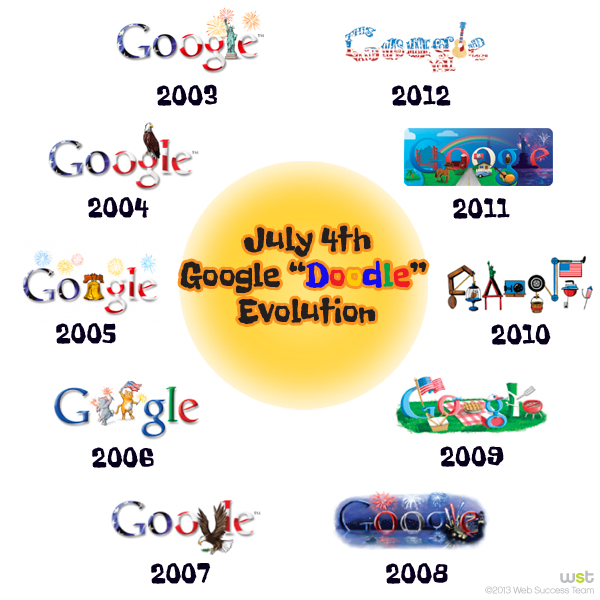 We have all become accustomed to a playful or meaningful logo (called the “Google Doodle”) being represented on the Google logo for every holiday. When it comes to Independence Day, starting in2000, there have been some pretty silly ones, and some that are worth remembering. So that’s just what we want to do, remember those that stuck out and how they show the evolution of the “doodle”over the years.

July 2003 was the first Independence Day that a Google letter was replaced by an image (Statue of Liberty); this is a good representation of “simpler” times for the Google Doodle. From this day forward, meaning and playfulness are found in every holiday doodle.

Clever in its random nature, this year’s logo is worth remembering because it was just so silly. 2006 had an image of 2 cats dancing around with sparklers. We are not sure what inspired it, but its randomness certainly started a conversation, and sometimes, that’s a more than sufficient online marketing goal.

One of the more visually interesting Independence Day doodles so far, for 2011, if you didn’t bother to look closely, you may not even have noticed that the 2011 image is a compressed map of the US. From San Francisco to New York and everything in between, playful images represent different parts of our country.

Last year’s Google Doodle featured the words “this land was made for you and me”, from Woody Guthrie’s iconic folk song. The Google Doodle is not limited to the good ole USA, as it has gone international, featuring special events and features specific to each country Google appears.

Before Google Doodles became clever and that cleverness became an expectation for holidays, once upon a time Google didn’t even bother to modify the majority of the logo design. We have to say we enjoy the progress towards more thought provoking images and we can’t wait to see what they come up with this year!

What subjects would you like Google Doodles to feature in this year’s Doodle and in 2014 while you’re at it? How about the iconic song “God Bless America” by Irving Berlin? Some say it should replace the Star Spangled Banner. But that’s a conversation for another blog! Happy 4th to you and your family.