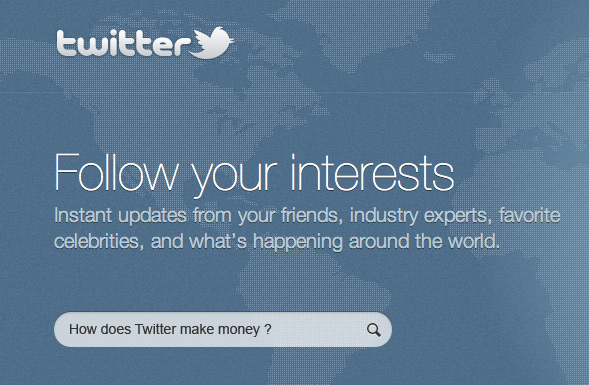 Many social networkers wonder just how does Twitter make money? Apple, Google and Facebook seem to print it by the truckloads. From its inception, people have used their 140 characters to ask that same question. The short answer is advertising, but Twitter CEO Dick Costolo has indicated that “commerce” is the new plan to increase Twitter revenue.

At the Fortune BrainstormTech in Aspen, Colorado, Costolo discussed his companies several advertising options including plans to offer self-serve ads. An example he mentioned was how sports teams and conference organizers used Twitter to match buyers with unsold inventory. For example, the San Diego Chargers football team wanted to avoid a TV black out in their local market, so they successfully promoted the sale of 1,000 tickets to a game. Unfortunately Twitter didn’t make money from the transaction but could do so in the future.

Costolo stated that the Chargers could have sold more tickets and made even more money from direct Twitter purchases rather than go to an different website to buy their tickets.

I can imagine a scenario where people may offer goods and services on Twitter and even create a bidding war for competing brands. Twitter could monetize this frenzy of activity by taking either a service charge for the transaction or a percentage of the sale. Once a seemingly altruistic way to communicate, Twitter is no different than other business trying to monetize their audience and offer a valuable service to its members.

Advertising will continue to drive revenue on Twitter, including sponsored tweets as well as sponsored trending topics. Stay tuned to further Twitter developments that could impact your Tweets.

As always, I look forward to your feedback. And you don’t have to limit your comments to a mere 140 characters!