The Latest Sensation for Shopping Addicts – Shopkick That Shopping Habit! 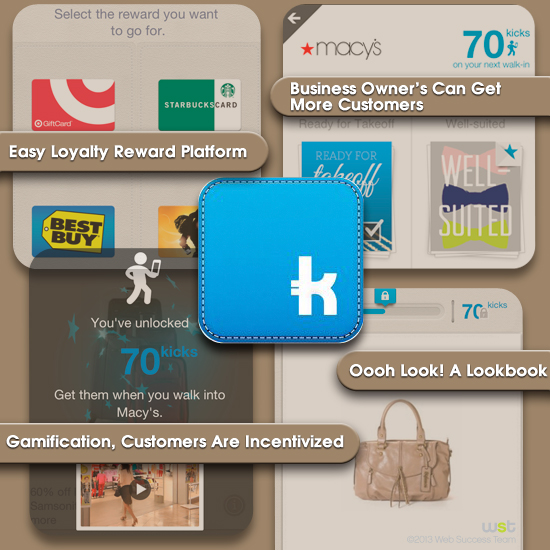 The Latest Sensation for Shopping Addicts – Shopkick That Shopping Habit!


By Janette Speyer and Katrina McNeill

Long established but recently made more usable, national retailers have been using Shopkick to drive foot traffic and incentivize spending since 2010. In 2011, Shopkick added a local arm which gave small and medium-size businesses the ability to get in on the action and capitalize on the buzz of this location-based shopping platform. But what is it exactly that makes consumers flock to Shopkick?

Benefits for the consumer

This loyalty reward platform is so easy to use. It rewards a shopper for shopping at participating stores but unlike competing mobile applications, like Foursquare and LevelUp, you don’t have to manually check-in or even touch their phones to start earning rewards. Instead, customers who’ve downloaded the Shopkick app on their iPhones or Androids automatically start earning points (or “Kicks” as Shopkick calls them). The moment a user walks by a participating retailer, the technology inside the store finds you and rewards you, and continues to track customers as they interact with merchandise and visit different areas within the establishment. The points that customers accumulate during their shopping expeditions can be redeemed for a variety of desirable rewards and discounts.

With the Shopkick revamp, we see an update to its app that allows shoppers to score even more rewards by starting their shopping at home. By identifying a product to buy at a retailer and saving it to a “look book” section within the app, shopper is rewarded points just for entering the product into the lookbook. Just one more facet of this product that helps to encourage regular engagement at Shopkick!

Shopkick is a great example of using gamification to get repeat customers and retailers love it, “Our Shopkick customers buy twice as often as a non-Shopkick user, and have helped increase in-store traffic,” says Fred Grover, executive vice president of the American Eagle clothing chain.  Wondering what the gamification element is here? It’s all about gaining rewards; customers are incentivized to return because of those marvelous discounts, free giveaways and more.

Using it as a business owner

Small-business owners with brick-and-mortar establishments in 10 major cities; (New York, Los Angeles, San Francisco, Chicago, Dallas, Houston, Seattle, Washington, D.C., Detroit and New Orleans) can take advantage of Shopkick to boost foot traffic and encourage current customers to visit more frequently. Once a business has been selected, Shopkick will handle the installation of its in-store signaling hardware and monitor the activity of participating users. Local merchants can sit back and relax, without having to worry about rotating special deals or tracking how many customers have checked-in. Too easy! Merchants can expect to pay less than $100 for Shopkick’s in-store tracking hardware, along with a commission fee based on the points their customers earn and the number of transactions completed by shoppers with the Shopkick app.

For the smaller businesses that can’t afford to give away gift cards and 50% off coupons, you are free to get creative with the incentives you offer. Coffee shops and bakeries can give away free cups of coffee or muffins, just like they would with traditional loyalty punch cards, while clothing stores and other local retailers can reward Shopkick customers with sneak peaks of their latest merchandise and first-access to exclusive sales.

Ready to get kicking?

Shopkick is a fast climber in popularity with over 4 million users. If you are confused at all about how it works, you can find more details in this video here. I am ready to start earning my “kicks,” how about you? Share which great rewards you have earned on Shopkick on Facebook, Twitter or Google+.