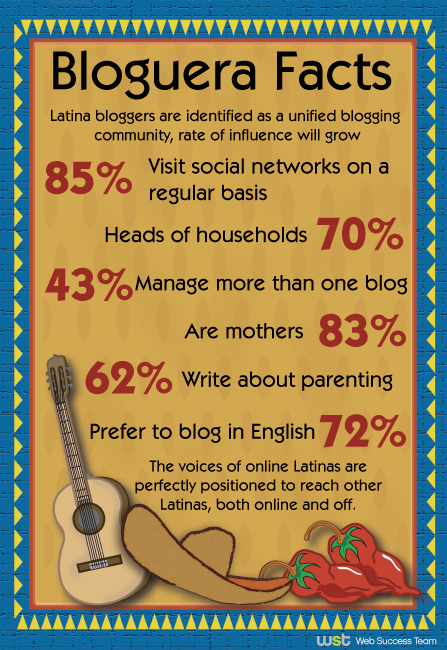 The influence of Latin bloggers, or “blogueras,” in the media are becoming more and more prevalent. Latinas are creating a name for themselves in the realm of social media, and their influence doesn’t stop there. Latina bloggers have been writing for a long time, just as other bloggers have, but only recently has the culture of Latina blogging really been identified. Slowly, experts have started to recognize the Latina blogger’s true reach and how gaining their support will play integral role in both political discourse and online marketing as well.

In 2009, the Latina blogging community really started to expand. Latinas saw an opportunity to get involved in the marketing world by starting their own blogs and promoting them via social media. One website called Blogs by Latins only had 156 registered blogs in 2009, however today, there are over 1,600. With the recent economic downturn, a lot of unemployed women or stay at home moms have turned to blogging as a means for making extra money on the side, while also still being able to fulfill other obligations.

According to one article on latinamomtv.com, a study was conducted that found that, “Hispanic women in the U.S. Is one of the fastest-growing online demographics, and more than 85 percent of Latinas visit social networks on a regular basis.” With that said, Latina bloggers have one of the strongest voices in terms of social influence. The more connected you are online and the larger your audience is, the more of an impact you’re going to make. Brands have realized this and have turned to Latina bloggers for help in selling their products. Marketing experts have found that people respond better to a peer, rather than a celebrity. Mom’s want to buy diapers from other mom’s, not from someone who doesn’t even have any children.

The Political Power of LATISM

LATISM is a group of bloggers that stands for Latinas in Social Media. It’s a dynamic blend of women bloggers that write about a wide variety of topics, and some were recently invited for a brief at the White House. Discussions included unemployment, jobs, education and health care. These are hugely debated political issues in the U.S. and since it is an election year, the Obama administration has decided to open a dialogue with the Latina community in order to engage the entire Hispanic population. While the Obama administration has also been criticized because of its relatively tough stance on immigration, having deported 400,000 people in 2011, so having an open dialogue is an important step forward in improving transparent engagement.

The Future of Latina Blogging

The future of Latina Blogging is unknown, however, it is apparent that it will continue growing and continue to expand its authority. Because Latina bloggers have the advantage of being identified as a unified blogging community, the rate of influence will only continue to grow exponentially. Also, given that the U.S. is comprised with millions of Latino immigrants and natives, the voice behind this demographic is only going to continue to get louder.