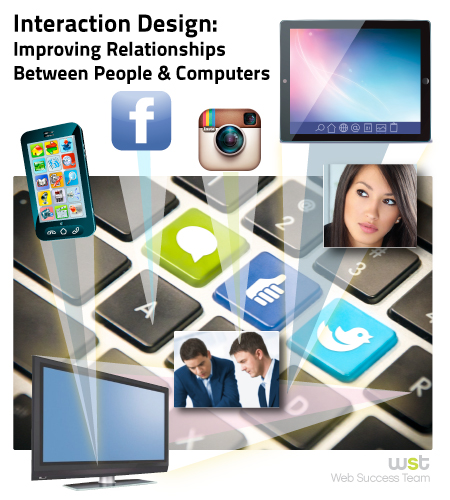 Interaction design is a relatively new industry that focuses on enhancing and improving human-technology interactions.  While it’s main focus is generally computer to human interactions, mobile phones and other user-based technologies are also examined. Interaction design makes the user experience a lot more enjoyable because its usually been carefully planned and designed to be as intuitive as possible. Computers have definitely come a long way in regards to being user-friendly, especially if you can think back to those DOS-based computer programs that were virtually unusable. Often abbreviated as IxD, interaction design differs from straightforward engineering since it is more abstract at its core. Instead of focusing on how things actually are, it focuses on how things might be. Being a fairly new field, IdX does have its challenges, however it does provide a lot of benefits and plays a significant role in the advancement of technology.

Interaction design has been around for several decades, however it wasn’t officially named as such until the late 1980’s. Designers Bill Moggridge and Bill Verplank originally thought of it as an adaption to interface design, so they initially promoted the use of this term. It wasn’t until about ten years later that the phrase was rediscovered and university’s started offering courses in this field. The first IdX program was established at the Royal College of Art in London in 1990, and in the early-mid 2000’s, programs began popping up internationally. It has taken off as an industry ever since and has started to play an integral role in how computers and programs are designed.

It’s no argument that computer systems are becoming exponentially complex. Sometimes it’s hard to maintain the balance between advanced technology and user experience. The more complex the technology is, the harder it is to make it simple for the user. This is where interaction design comes in. Designers tackle the umbrella problem of communication, which means improving communication between people and computers in all aspects. There are several aspects of communication that are examined, however human condition and behaviors are studied in order to design a system that is the most user friendly. Activities such as multi-tasking are studied in order optimize the user experience. Common mistakes and human errors are also examined in order to design the computer to best counteract these problems.

Interaction design is definitely a field that is becoming noticeably popular, however the behind the scenes benefits that it provides are immeasurable. It is the heart and soul behind every computer program, application or operating system. Without it, you would have to be a computer science wizard in order to be able to get computers to operate the way they do now. It’s no debate that computer functionality has drastically improved due to the integration of IdX. Interaction design fosters the collaborative approach to innovation and it’s constantly trying to improve the relationship between humans and technology. Some may say that it has even improved the development of the human race by facilitating the advancement of medical research, food production, communication and other human activities. One can hope that as the industry is perfected, technology will continue to become more user-friendly which will simplify communication and grant access to life-saving technologies across the world.