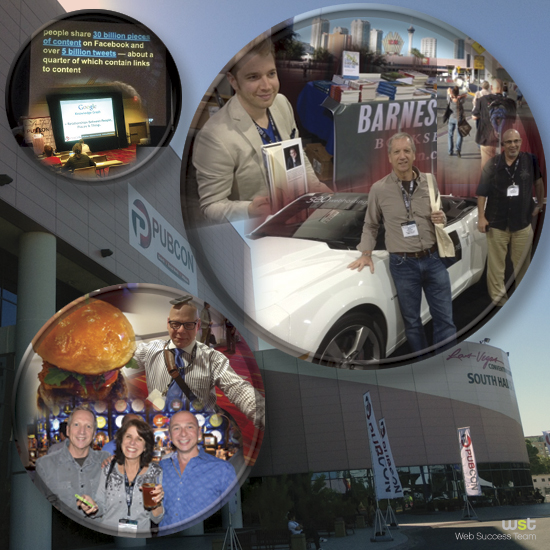 By Janette Speyer and Alison Brown

As usual PubCon day 2 was jam-packed full of information. Also known as the “Premier Search and Social Media Conference,” everything from social media to search engines and online advertising were discussed. So what did we learn while attending? Below is a recap as well as some of the highlights from the day.

Social and SEO Are Merging

It’s no surprise that social and SEO are coming together to form an alliance, or rather social is taking over the optimization sphere. Keywords will no longer be as important as engagement, and building relationships with customers will be more important than hiring someone to re-write the content or your website. What you share with people and how you interact over the Internet will now influence your site more than ever.

Why You Need Google+

Google+ hasn’t really taken off yet, but if Google has their way, it will soon. After all, if you’re in the social media and online world, you need to be a leader and a trailblazer or you will quickly fall behind. Additionally, since Google will be transitioning towards social engagement rather than using links for optimization, the more engagement you have with influential people on G+, the higher your ranking will be. For instance, if you get a celebrity to re-tweet you or plug your content on G+, this will have a greater influence than having them link to your page from their site.

Social Influence Is Bigger Than Ever

Linking apparently is becoming a thing of the past. As mentioned above, your social influence will start to determine your ranking and not inbound links. It used to be that external sites linking to your site would increase your ranking, but this is about to change. It may be changing for the better in some people’s view because it’s making businesses more honest by taking into account reviews about your services. Any bad review by an influential Klout goer may cloud your results.

Probably the biggest news item that has been recently announced is Google’s plan to change its algorithm. Changes to Penguin and Panda have now started to incpenalise sites for having out-of-date content and poor linking rather than lots of good content and keyword usage. By incorporating social media presence, the algorithms can now see how active you are with engagement. If you have a lot of dead links just in order to improve rankings, this will no longer help—social media has taken the focus.

Change is Here, That’s For Certain!

As PubCon neared its end, one thing was clear: changes for Google are on the horizon. At the end of the day, the changes are asking businesses to be more honest and they are generating greater accountability online for consumers, but at what cost? If were you at PubCon Las Vegas, we’d like you to join the conversation below and let us know what you learned, or we’d love to discuss concerns about the upcoming changes.