Viggle: The App That Pays You to Watch TV

Home → Branding →Viggle: The App That Pays You to Watch TV 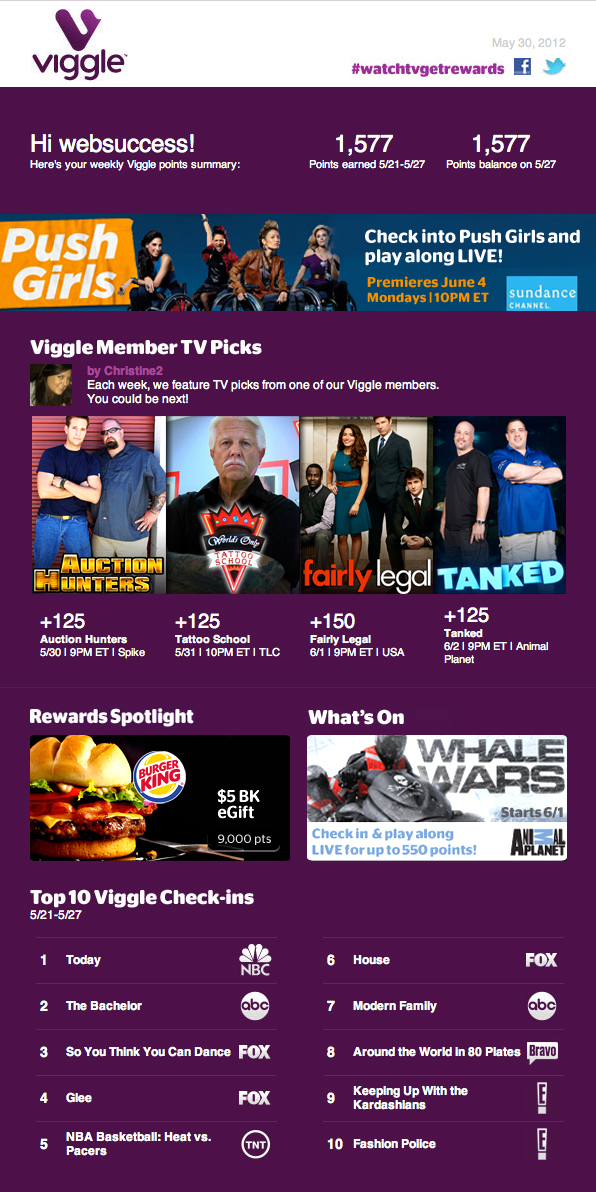 Viggle: The App That Pays You to Watch TV

Embrace your inner couch potato and download Viggle: the new app that rewards you for checking in and watching your favorite television programs. Viggle automatically recognizes what show you’re watching by using sound recognition and awards you points for checking in. You can redeem points for everything from movie tickets, to music and gift certificates. This app is great news for marketers as well since the app has the potential to have a broad appeal. In today’s world where everything is connected online, it makes sense to include another daily activity into this realm. Because if you’re already watching, why not check-in and earn free prizes?

How it Works
You get one point per minute when you check in, so if you watch an entire episode of Mad Men, you will receive 60 points. If you watch an episode of a show and decide you aren’t really a fan, then you only get points for however long you actually watched. However, if you watch the two-hour season premier of Glee, you will probably score about 120 points. According to one article on slate.com, Viggle is currently offering $10 on iTunes for 18,000 points, however 300 hours of TV time is quite a lot for the average TV-watcher.

Offer Coupons to Loyal Fans
While consumers can win prizes, marketers on the other hand win something else. This app gives them some insight into what shows are being watched and how frequently. They also have the opportunity to squeeze in more advertising time while using the app, however advertisers can also offer coupons to loyal fans. In addition to accruing points, you can also accrue bonus points from companies who are looking to gain your devotion. Apparently the other night, one could gain 300 points from watching just two hours of So You Think You Can Dance. There is also something called Viggle Live Questions that ask you questions about the show while it’s airing. You can receive over 200 points for answering a few simple questions, so points (and loyalty) can add up fast.

Constant Interaction
If you’re in marketing, then nothing probably sounds better to you than a chance to interact with your customers on a persistent basis. Viggle provides just that, a chance to interact with consumers since most of the time, they are usually checking something on their iPad, laptop or smartphone. If you can get people to interact with you even while they’re watching TV that is an accomplishment for advertisers since the invention of TiVO and DVR has decreased the overall impact of commercials. It’s a new way to connect with consumers on a personal level since you are getting them to answer questions while gaining valuable insights into their watching habits.

Incentives Pay
Viggle is a great way to get customers to interact with your brand, all while offering a few simple rewards for their efforts. Even though Viggle is currently only available for Apple products, a beta Android app is definitely in the works. Unlike the app “GetGlue,” which allows you to “check in” when you watch your favorite show, Viggle offers monetary incentives so that people will be more likely to use the application regularly. The app has the potential to go viral and, if all goes well, advertisers will have a lot more information available to better target their audiences.